This guide is intended to provide guidance on system configuration to ensure reliable operation and upgrades of SAFR Server.  This document does not cover system design.  If needed, discuss with your SAFR Support Engineer about deployment details such as:

The following table summarizes SAFR Storage configuration recommendation.  Storing images and database on separate drives as described here will improve performance and make it easier to perform backups and upgrades.

For more information, refer to the Hardware Selection Guidance article on SAFR Helpdesk.

Following table provides guidance for system specifications.  For more information Hardware Selection Guidance article on SAFR Helpdesk.  Ensure you are using sufficient RAM for both GPU and System RAM.  While SAFR is able to scale its effort based on available processing capacity, running out of RAM will result in unreliable operation.  GPUs should have at least 5 GB RAM for server to function at all and as the number of cameras increase, the number of GPUs and RAM capacity must also.

If designing a SAFR Cluster with ore than 3 servers, consider designating only 3 of the servers as database and analytics only on others servers (using simple join).  Allocate limited HDD storage and RAM on analtyics machines and faster SSD and more system RAM on database nodes.

SAFR Server is surprisingly easy to install.  Even a clustered server environment requires very few interventions by the user.  SAFR handles many complex details such as upgrading system dependencies and preparing GPU models all without any human intervention.  But don't let this deceive you.  There is a significant amount of engineering that goes into the installation procedure and its always being refined.

Set up Object Storage for Scalability

For performance reasons, its a good idea to store images and database on separate high performance drives.  If you are have separate drives, you will need to create links to your Object Storage and Database drives as follows:

Should you run into any problems during installation, please copy the install.log file out of the SAFR Application Directory (C:\Program Files\RealNetworks\SAFR or /opt/RealNetworks/SAFR).  This file will help the SAFR Support team quickly identify the cause and resolution.

This topic is beyond the scope of this document.  This section will cover some of the basics of camera and SAFR configuration. 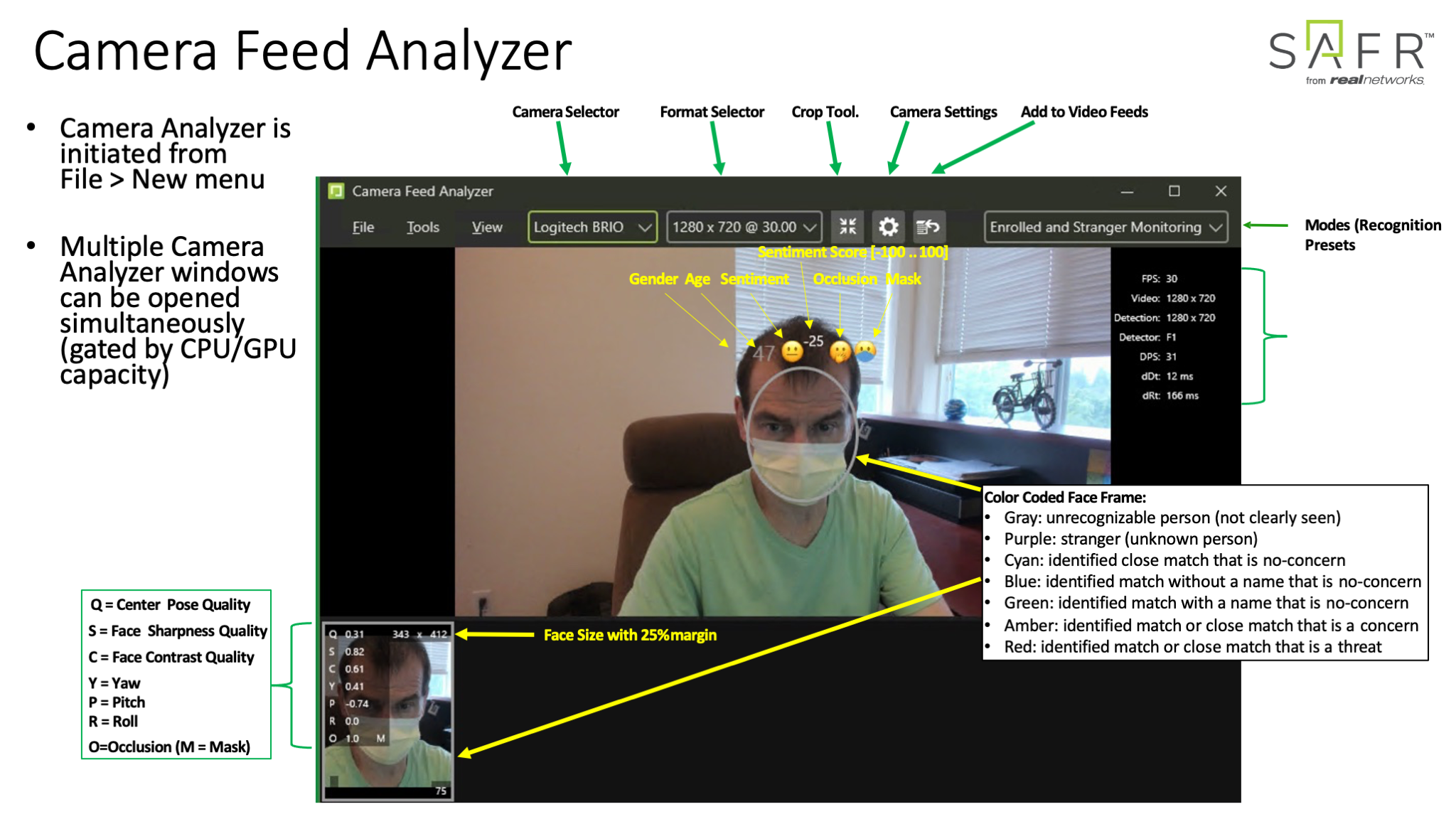 Have a subject stand in the view of the camera and review the critical recognition parameters such as Face Size, Center Pose Quality, Sharpness, and Contrast.  These can tell you if the image from the camera is of low quality (Sharpness and Contrast) the camera location or angle of view is resulting in small face size.  Refer to SAFR documentation for information on how to use these parameters.

Its a good idea to load test your SAFR.  An easy way to simulate load in SAFR is to use files to simulate cameras.  You can process many files thru the Video Feeds Window.  Please refer to this article for information on how to add a file to the Video Feeds window and set it to looping.  You can add any number of files and start them.

As a convenience, FeedConfigv.xlsm (XLS Macro) can be used to add many video feeds with file source to virgo with a simple click on button.  Please check with your SAFR Support Engineer for information on how to use this tool if interested.

Once loaded, check that SAFR is performing well.  Check CPU and GPU processors are not overloaded and there is sufficient RAM.  The easiest way to do this is using the Windows Task Manager on Windows.  On Linux, nvtop and htop are excellent graphical tools to allow you to visual see load over time.   Below shows a screenshot of each.

On Windows, select the NVidia GPUs and change "Video Decode" in lower left of the 4 graphs to "CUDA".   NVIDIA cards are made up of different processors, CUDA being one of them.  As you can see above, except for 4k video streams, CUDA will be the bottleneck on the GPU.

Ensure that CPU does not spike to 100%.  Ensure you are running at highest load (most faces).  SAFR is able to scale its CUDA load so it is ok to allow CUDA to run high but its best if its below 100% for majority of the time.  Ensure that system and GPU RAM are not at their limits.

Its important to monitor your server to ensure that SAFR is functioning properly.  Following are best practices for monitoring.

Set up Monitoring on each processor (SAFR Video Gateway) and on the SAFR Server thru the Video Feeds Window.

In the Video Feeds window, choose "Configure Processor" for each processor (machine) listed.  You will see one processor for SAFR Server and one for any Video Gateways connected to your SAFR Server.  Under the "monitoring" section, add alarms by clicking the "+" button. 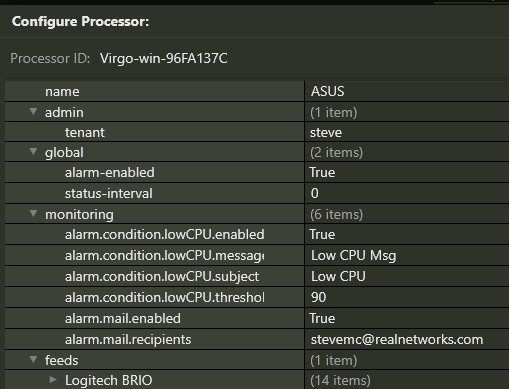 Add alarms for the following:

You may or may not want to set up lowCPU and lowGPU alarms.  These may generate many false alarms due to the nature of variability in the inputs.

Always backup SAFR before an upgrade or any significant change to your SAFR system.  (Murphy's law - whatever can happen will happen)

SAFR provides scripts to back up all configuration, data and images.   We recommend that you use SAFR scripts to backup configuration and data but use alternate solution for images backups such as such as https://www.backblaze.com or rsync to another machine.  Backup of images will increase the backup time significantly.  It may take up to 1 hour for each camera with medium traffic if including images.

SAFR backup scripts are located in the 'bin' directory of SAFR Server installation.  One script called 'backup.py'.  Run 'backup.py -h' for help.  Its a good idea to transfer the backup file to another server.

Restoring SAFR should be done in inverse using the restore.py script.

Backup and Restore for SAFR Clusters

The backup and restore process is only meant to be run on the Primary server of a SAFR Cluster.  Data restored on the primary will automatically be synchronized to the SAFR Secondary Servers after the SAFR Primary Server is restored.

To upgrade a single SAFR Server, do the following

Upgrade will take anywhere from 10 to 20 minutes depending on machine speed.  Services will be offline during this time.  There is no mechanism for zero-downtime release though this is something we would like to do in the future.

To upgrade your SAFR Server cluster to the latest version of SAFR, do the following: