In the context of facial recognition technology, "detection" refers to the process of finding objects in videos for subsequent processing. "Recognition" refers to the process of creating biometric signatures and matching faces. SAFR separates the detection and recognition processes into two distinct services. Although SAFR can run both processes on a single machine, it's helpful to discuss them separately in terms of load effect. This article describes the detection process which occurs in VIRGO video feeds. The recognition process is discussed separately in Auto scaling and manual scaling of recognition loads in SAFR Server.

Video Recognition Gateway (VIRGO) is designed to dynamically scale loads by varying the number of frames per second that are processed. This is done automatically by SAFR across all feeds, but you can also manually control the scaling by adjusting frame rates, whether via video feed configuration settings or via input sources.

To understand how this works, its best to review factors that pertain to detection frequency, as described below. 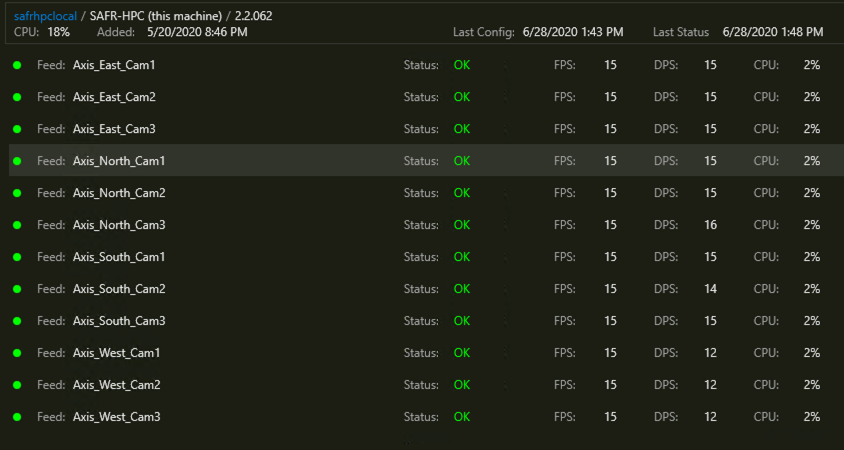 DPS is the number of frames SAFR was able to process.  You can see above that most feeds processed all the frames, while some of the feeds at the bottom of the list only processed 12 of the 15 frames.

SAFR also report the detection time.  This can be useful to determine if there is significant latency with each frame are processed. Below shows the detector latency for the Camera Analyzer or Video Feeds windows. (both found in the SAFR Desktop Client)

Note that in both cases, recognition time is ~8 milliseconds. This represents a system that is very low load, and thus you would expect no auto scaling to be occurring.

Nothing needs be done to enable auto scaling on the SAFR Server; it's a natural behavior of the system.

Although reducing the frame rate can improve performance, it's important not to reduce the frame rate so far that tracking is no longer possible. Loss of tracking will cause inefficiencies in recognition accuracy.  This is because trackingconfidence is increased and server load decreased when SAFR is allowed to track a face from frame to frame.