In the context of facial recognition technology, "detection" refers to the process of finding objects in videos for subsequent processing. "Recognition" refers to the process of creating biometric signatures and matching faces. SAFR separates the detection and recognition processes into two distinct services. Although SAFR can run both processes on a single machine, it's helpful to discuss them separately in terms of load effect. This article describes the recognition process, which occurs on SAFR Servers. The detection process is discussed separately in Auto scaling and manual scaling of detection loads in VIRGO.

SAFR Server dynamically scales recognition loads by varying the frequency of recognition attempts on any given face. This is done based on client configurations coupled with server recognition response times.

To understand how this works, it's best to review SAFR settings that pertain to recognition frequency.

From SAFR Desktop Camera Analyzer or Video Feeds you can view the average recognition time for that feed.  This is reported in the upper right of the video preview.  Below are two screenshots.

Note that in both cases, recognition time is 99 milliseconds. This includes round trip time (RTT) to upload face images and receive responses from server. Anything below 50 ms (excluding RTT) suggests the server is performing as fast as expected.  Some servers may perform slower even when unloaded due to disk or other I/O performance issues.

Nothing need be done to enable automatic scaling on SAFR Server. This is a natural behavior of the system.

When strangers are in the camera view, the default setting of 0 sec will result in an aggressive recognition loop.  As soon as a response is received from the server, the client will send the next best image for recognition. This results in a very high recognitions per second (RPS) on the server for even a small number of faces. The only delay between recognitions on the server is the round trip time.

Note: Because the server will auto scale load, this is not necessary except in special situations where low server latency is desired and preferred over ensuring that strangers are recognized quickly even if not initially.

Following are the key metrics for server load.

Below is a graph of Windows Task Manager showing the important metrics to monitor.  Note that the CUDA graph is not visible by default and has to be selected from the dropdown. 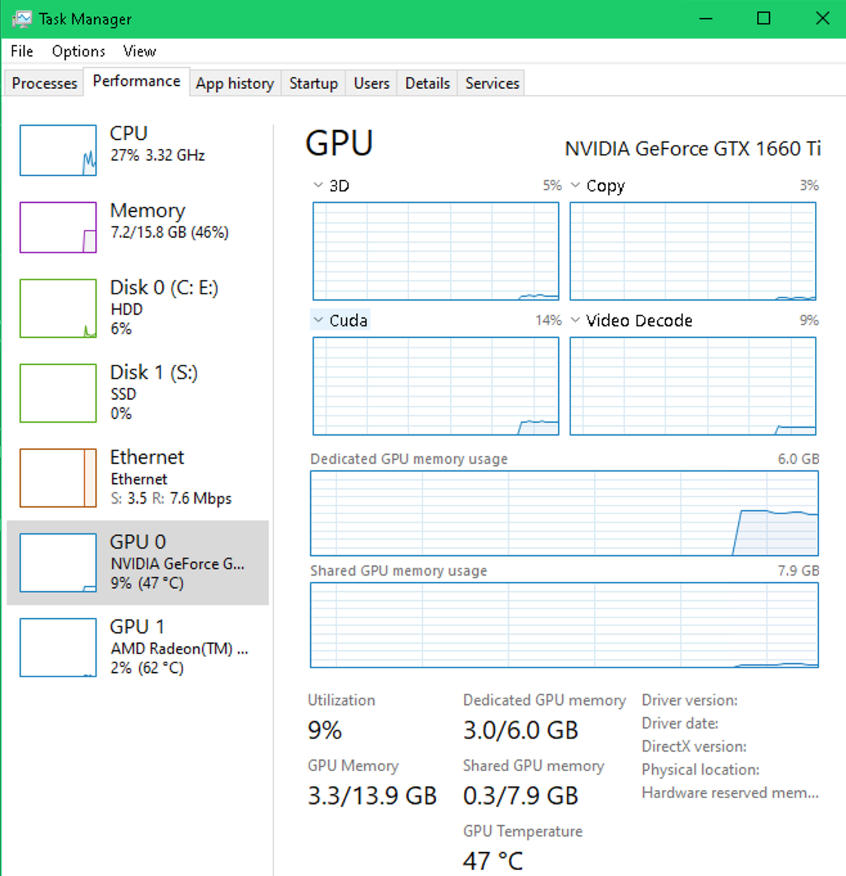